The Ferry ship Cariddi was launched in Trieste in 1930 at the shipyards Reunited of the Adriatic, and was one of the first units of the fleet of FS, at the time in service in the Strait (1932), to be equipped with diesel-electric engines, the first of the genus in the Navy Italian merchant. 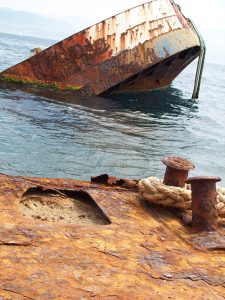 At the time of its commissioning, the ship represented a veritable revolution in the transport panorama of the strait, considerably increasing the load capacity of railway and non-rail vehicles, the frequency of connections between the two Calabrian shores and Sicilian and the comfort of passengers who stayed there with even a real accommodation full of precious woods. Together with the “twin” unit Scilla, a little older, the Cariddi soon became the flagship of the pre-war FS fleet; It was immediately entrusted with the ferrying of the most prestigious passenger convoes.

Both Cariddi and Scilla inherited their name from a previous pair of ferry-boats with paddle and steam engines, which entered service at the end of 1896, exactly three years after the release of the concession for steam navigation through the Close to the company on the railway tracks of Sicily, which took place in Novenbre 1893. In our case it makes sense then to talk about “Cariddi II”. For the record, the “Cariddi I” ended his service in 1923 while the twin “Scilla I” was Torpedid (or jumped on a mine, the thing is controversial) in front of the town of Catona in 1917, during the First World War when the strait was declared war front and Equated with the first line of the Alps.

During the second conflict all the ferry ships of the F.S. They were involved in the war operations: the twin Scyila became part of the military auxiliary Naviglio and with mixed personnel laid mines in the Sicilian Channel and then sunk by aerial bombardment in the port of Messina, the Aspromonte transported troops German until it was sunk in Capo Bon for Torpedo, the Reggio and the Villa were self-sinking in port; The Cariddi instead survived but several times hit by air raids, in the summer of 1943 was the protagonist of an incredible story. The Allied troops were now at the gates of Messina when the Navy, ordered the commander of the ferry to sink the ship. Thus, on 16 August of that year the charade of German war material was at anchor near the Rada Paradiso (unable to the government for a car fire) waiting to be towed to Villa San Giovanni; Here the “sea-sockets” were opened to flood the rooms below decks and to sink them. 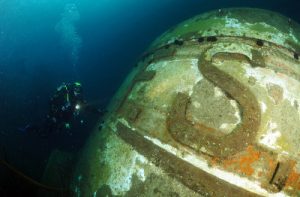 However, the ferry resisted the flooding and, to make it go down, it was necessary to resort to the explosive by providing some flaws aboard. This accelerated the sinking of the unfortunate unit causing unfortunately also its tipping. The cariddi found itself, so, lying, upside down, on a backdrop of about 20 meters and so remained for about six years.

After the war, between 1946 and 1948, the ship, still submerged, was freed from the divers both by the war material and by all the superstructures. Subsequently, in 1949, the increase in demand for transport through the Strait of Messina and considered that the ferries were not ready (the future according to Aspromonte and Mongibello) ordered by the FS to relaunch the service between Messina, Villa San Giovanni and Reggio Calabria, the FS administration decided to recover the ship, thus commissioning the firm Weigert of Messina. The operations of recovery of the wreck (had now remained the only Hull overturned) ended on 21 July 1949; They were first plugged into the flaws, closed all the porthole and put some damaged sheets and bulkheads. Thus using 6 air-filled stabilizers and bound to the ship by the divers, the Cariddi reemerged! Upside down the ferry was towed in the port of Messina. After a few months the overturned ship was docked near the port of the Peloritano capital until 21 December 1949 finally took place the operation of tilting the hull. 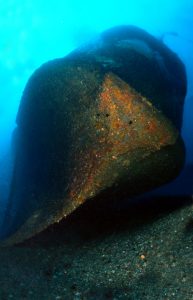 In the months preceding the straightening, the wreck was subjected to interventions of cleaning, maintenance and recovery of all the equipment and reusable materials, after revision, during Reconstruction. The hull conditions proved to be more than satisfactory: There were no major deformations of the metal plates or lacerations, excluding a forward gait, on the starboard side, above the waterline, probably produced in Opportunity of sinking.

The reconstruction of the ship was commissioned to the shipyards of the Tirreno of Genoa, which, however, having neither the basin of Palermo, engaged for a long time in other important works, or those of Genoa for reasons of economic disposition, proposed to Cut the ship into two wing sections on one of the yards of Riva Trigoso shipyard, to be aligned and then reunite. The Cariddi was then towed to La Spezia where, on December 9, 1951, it was cut in two parts in one of the docks of the Navy’s arsenal. The two sections of the hull were then towed to Riva Trigoso, where the first (forward trunk) was winged on the port No. 3 of the shipyard on 14-12-1951 and the second on the same stopover, in continuation of the first, the 19-12-1951.

It was at that time that the idea of taking advantage of the ship’s cut was born to increase its length by about 11 meters, sufficient to increase the length of the track beam to such an extent that it would allow an increased load capacity from 32 to 36 wagons of type “F” , interposing between the two sections, suitably spaced after the alignment, a third section 11 meters long (the one with the second chimney). The rails became four, they were installed new

There engines and the bow part was modified in such a way as to create a platform for the transport of vehicles above the track deck. It took advantage of the works also to equip the ship with a forward castle (characterized by the two doors rotating by electric motors) and to prolong the bridge of walk creating a platform able to accommodate 15 cars, that to cope with the Continuous increase of the vehicles that required the passage through the Strait of Messina. The Cariddi thus acquired the aspect that has marked it up to our days, without prejudice to some modifications intervened in the years ‘ 60 (including the modifications of the track of the tracks to allow the passage of the passenger cars about 26 meters long) and in First Years ‘ 80 (Installation of new 4-stroke Diesel engines). 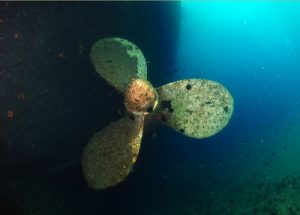 The second launch was celebrated on 20 October 1953 in the presence of the Minister of Transport, Director general of FS and other authorities and personalities. Immediately after the ship was towed to Genoa in which port the next day was subjected to the regulatory stability test. The results were satisfactory, thus, from October 25 to November 8, were embarked on the ship fuels, lubricants, equipment and supplies and made the development of all the main machinery and auxiliary. From 16 to 18 November 1953 the ship carried out the official tests on the open sea with continuous operation of all the machinery for over 54 hours, during which various gaits and various powers were held (including the maximum power for six hours), as well as the tests of Evolution, stopping motion, driving rudders in forward and reverse gear, detection of fuel consumption and oil, etc.

After the tests, the ship re-entered the port of Genoa where, in the following days, some details of setting up and painting were completed.

On November 24 The ship lifted the anchors to face the return journey in the waters of the strait where the next 27 November received – once again according to the Chronicles of the time – with great celebrations and a memorable participation Popular. In fact, just dubbed Punta Faro the ferry was surrounded by fishermen’s boats that, rowing, had met, the coaches that traveled the coastal highway sounded their horns as a sign of welcome, thousands of Messina from the beaches Costers waved their handkerchiefs as a sign of greeting. Everyone would answer the Charyid by screaming his siren aboard. In the vicinity of the port all the ferries at the time in service met the newcomer, as to welcome the flagship. 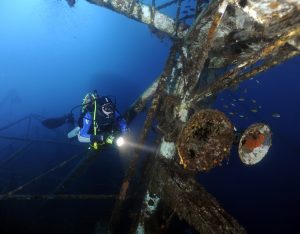 The Cariddi resumed service on December 30, 1953, just over ten years after its sinking, and for 38 years (made its last trip in service Day 14 February 1991) has assured the ferrying of the most prestigious trains and passenger cars Between the Sicilian and Calabrian shores with Solerzia, pride and elegance.

The following year, 1993, the Superintendency for cultural heritage of the Sicily region declared the ship well of historical and ethno-anthropological interest particularly relevant: the initial idea was to make it a museum of the sea, floating, monument to Seafaring culture between the two shores of the strait. 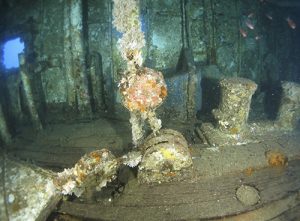 Once purchased, always according to the local chronicles, were born for the province some difficulties of management of the ship; In fact, for the ordinary maintenance the provincial administration turned to a maritime agency, with which it concluded a convention. Subsequently there arose problems concerning the payment of the services of opera and of the service of this agency which interrupted its services in favour of the Cariddi.

Abandoned to its destiny moated at the pier Nuremberg of the port of Messina, for several years the Cariddi has been victim, sometimes of petty theft and, at other times, of real looting, refuge of homeless people, registering also a principle of fire that It has damaged some salons. No one knew what to do with this ship. Sometimes the local chronicles have reported demonstrations of interest to the use of the ship presented by people or entities, but none of these demonstrations has then materied, you want for one reason you want for another.

For the needs of space within the Falcate area of the port of Messina and to subtract it (perhaps) to the constant visits of unscrupulous people who have been cannibalized and others, swerve, who had placed the dwelling, the ship was moved just outside the port of Messina in the vicinity of the ferry landings of the private shipping companies. The epilogue was now inevitable, that location was too exposed to the weather and the storms. So, on March 14, 2006, the Cariddi has “dumped” and slowly rested on the bottom leaning on its left flank.

Followed the unnecessary controversy, the ordinances of removal of the wreck by the local harbor authority, the opening of a file of inquiry by the judiciary, but all this did not lead to anything more than a few reports on the local Daily head.

Today, the Cariddi is still underwater, she only emerges a part of the stern to the perennial warning of the effects of neglect, disinterest and abandonment, “forces” — these — intangible yet so effective that the cariddi sink, for the second time and Without ballast or explosives.

of the SOC. Cooperativa Ecosfera and Assoc.ne Ferrovie Sicilian AFS