Found new wreck in the harbor

Found new wreck in the harbor

FOUND THE WRECK OF A STEAMBOAT IN THE PORT OF MESSINA

From the Facebook page of the Superintendency of the sea…

In March of 2013 was held an exploratory underwater campaign organized by Ecosfera Diving and finalized-with the collaboration and assistance of the underwater departments of the Navy and Coast Guard-to the documentation of the wreck of the ship ” Groppo “, lying on the bottom of the port of Messina on a batimetric between 40 and 60 meters deep.

During this campaign, the team composed by Lieutenant Giuseppe Simeone (commander of the core divers of the Coast Guard of Messina), Domenico Crisopulli (underwater operator of the Navy) and Domenico Majolino (owner of Diving Center Ecosfera of Messina), has carried out a prospection away from the wreck of the ship “Groppo” following some remains apparently belonging to the same, until reaching near the wreck of the ship Produgal (ex Ruskin). About 50 meters away from the starboard side of the Produgal was noticed a wreck almost completely covered up, at a depth between 55 and 62 meters, of which are visible the remains of the bow and the starboard wall where you can see part of the planking In wood covered with other material; At the stern there is a pile of pipes, compatible with those used to power a boiler, which seems to have undergone an explosion. The wreck has been documented and noted, although the actual dimensions are only intushable as the constituent elements are only minimally visible as most of the wreck is covered by the sediment. At the first dives are followed archival research, as well as other investigations with operators and underwater vehicles, in order to seize distinctive elements that could allow a certain identification. On 23 and 24 August 2017, further dives were also conducted with the ROV (Remotely Operated Vehicle) provided to the core divers of the Messina Coast Guard in order to document other useful elements.

According to the data in possession, the wreck could be comparable to that of an English steamship of the XIX century, probably used for the ferrying between Sicily and Calabria.
The already existing identifying hypothesis, to which it has been received on the basis of the historical news acquired, will be Defnita shortly, just completed the studies conducted by the Superintendency of the sea and the Coast Guard with the Diving Center Ecosfera of Messina.

Declaration of the Superintendent of the Sea Sebastiano Tusa:

“The fantastic interior of the” scythe “of Messina area, now entirely port, continues incredibly to reserve surprises thanks to the stuariness of underwater researchers of the Navy, Coast Guard and the Diving Center ecosphere of Messina with the technical-scientific coordination of the superintendency of the sea. Already a few years ago this backdrop had returned to memory the Produgal, the Russian ship linked to the tragic history of the earthquake of Messina because it was his sailors to lend the first aid to the suffering population of the city destroyed by the earthquake. Today, during a documentation campaign of the wreck of the ship “Groppo” Italian torpedo boat sunk on 25 May 1943, lying on the bottom of the port at a depth between 40 and 60 meters, appear the appearance of another wreck. About 50 meters away from the starboard side of the Produgal between the 55 and the 62 meters you can see the remains of the bow and the starboard wall of wood clad. On the basis of the first observations and analyses it would be the wreck of a nineteenth-century wooden steamer which we hope to identify as soon as possible. ”

Presentation of the book “The Paths of the Strait”; at the Marineria Festival and article publication Marin Sanudo
LST 429 Landing ship in the Sicilian Channel 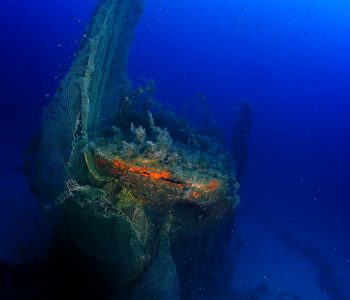