Press release from the website of the Superintendency of the Sea:

“The monitoring of the shipwreck of the landing ship HMS LST-429 in the Sicilian channel was completed by the team of studies composed by the diving center Blue Dolphins in Lampedusa, led by Alessandro Turri, and the diving center Ecosfera of Messina, Led by Domenico Majolino.
The activity was carried out in the autumn of 2017, during which video-photographic material was realized useful for the concrete identification of the wreck and for the evaluation of the conditions of the same. All the material was handed over to the Superintendency of the sea as part of a careful and fruitful collaboration for the preservation and dissemination of historical-cultural heritage in the waters that were the scene of violent clashes during the second World War.
The landing ship LST-429, Class Mk2, was created for the American Navy at Bethlehem-Fairfield Shipyard Inc. of Baltimore in 1942. It was launched on 11 January 1943 and never entered service for the United States as it immediately transferred to the British Royal Navy. 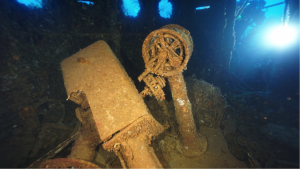 On 3 July 1943 he sank in the international waters of the Sicilian Channel.
The wreck lies on a backdrop of about 38 m, surrounded by fishing nets, and broken into two sections.
The aft stub is located in the navigation trim; The two propellers and the two rudders, characteristic of the landing means, were kept intact as well as the turret. Behind the bridge are clearly visible the two defenses, covered by dense biological concretions.
The forward stub lies parallel to the stern section, inverted, with the bow facing towards the propellers. Inside are identifiable the wheeled means part of the load.
The expedition was attended by: Alessandro Turri, Domenico Majolino, Monica Tentori, Mauro Bombaci, Antonio De Carlo, Marco Ruello, Francesco Donato, MariaGiovanna Piro, Stefano Saleri, Giorgia Pelegalli. “
Found new wreck in the harbor
Wrecks in the Sicilian Channel 3. LST 429

Found new wreck in the…